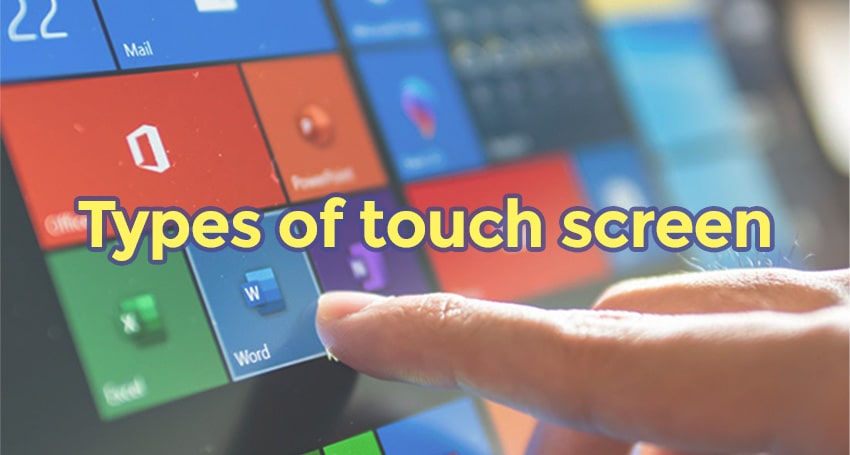 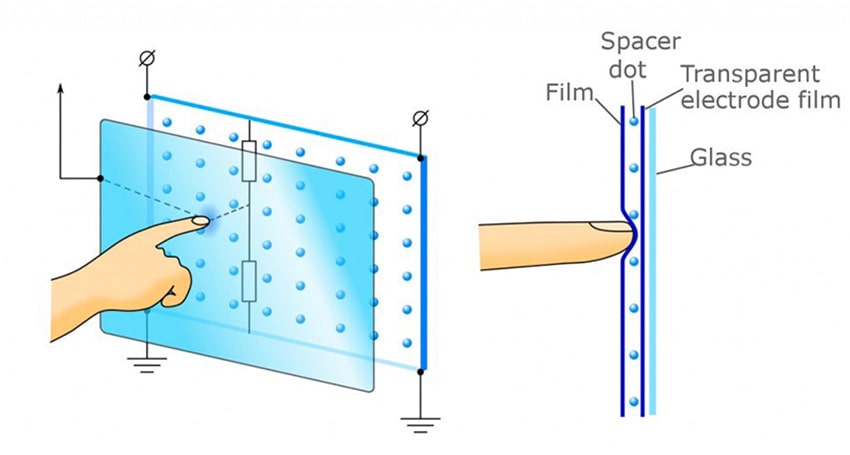 Resistive touch screen is a kind of sensor, which is basically the structure of film and glass. ITO coating is coated on the adjacent side of film and glass, and ITO has good electrical conductivity and transparency. When touching operation, the ITO in the lower layer of the film will touch the ITO in the upper layer of the glass, and the corresponding electrical signal will be transmitted through the sensor, which will be sent to the processor through the conversion circuit and converted into X on the screen through calculation, Y value, and complete the click action, and appear on the screen.

The advantage of resistive touch screen is that its screen and control system are relatively cheap, the reaction sensitivity is very good, it is not afraid of dust and water vapor, and it can adapt to various harsh environments. It can be touched by any object and has good stability.

1. The resistive touch screen has high accuracy and can reach the pixel level. The applicable maximum resolution can reach 4096x 4096.

2. The screen is not affected by dust, water vapor and oil pollution, and can be used in lower or higher temperature environment.

3. The resistive touch screen uses pressure sensing, which can be touched by any object, even with gloves, and can be used for handwriting recognition.

4. Resistive touch screen is relatively cheap due to its mature technology and low threshold.

The disadvantage is that the outer film of the Resistance touch screen is easy to be scratched, which leads to the unavailability of the touch screen, and the multi-layer structure will cause great light loss. For handheld devices, it is usually necessary to increase the backlight to make up for the problem of poor light transmittance, but this will also increase battery consumption.

1. The resistive touch screen can be designed as multi-touch, but when two points are pressed at the same time, the pressure on the screen becomes unbalanced, resulting in touch error, so the realization degree of multi-touch is difficult.

2. The resistive touch screen is easy to damage the touch part of the screen due to scratches, etc. 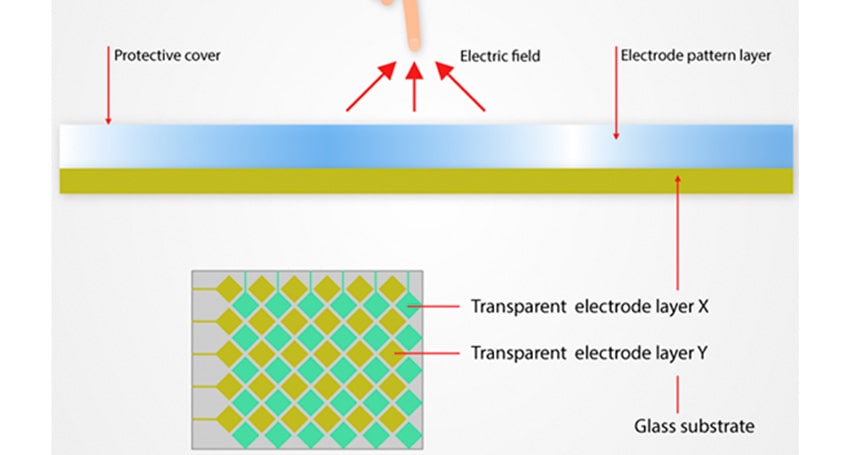 Capacitance technology touch screen works by using the current induction of human body. Capacitive touch screen is a four-layer composite glass screen. The inner surface and interlayer of the glass screen are coated with a layer of ITO respectively. The outermost layer is a thin layer of silica glass protective layer, and the interlayer ITO coating is used as the working face, four electrodes are led out from the four corners, and the inner ITO is the shielding layer to ensure a good working environment. When the finger touches the metal layer, due to the electric field of the human body, a coupling capacitor is formed between the user and the surface of the touch screen. For high frequency current, the capacitor is a direct conductor, so the finger absorbs a small current from the contact point. The current flows out from the electrodes on the four corners of the touch screen, and the current flowing through the four electrodes is proportional to the distance from fingers to the four corners. Through accurate calculation of the proportion of the four currents, obtain the position of the touch point. The capacitive touch screen only needs touch, and does not need pressure to generate signals.

1. Capacitive touch screen only needs once after production or does not need correction at all.

2. The life of capacitive touch screen will be longer.

4. Capacitive type can be used for large-size touch screen

2. The capacitive screen has serious reflection of light. Moreover, the four-layer composite touch screen of capacitance technology has uneven light transmittance to light of each wavelength, which leads to the problem of color distortion. Due to the reflection of light between different layers, it also causes blurring of image characters.

3. Hands wearing gloves or holding non-conductive objects do not respond when touching, because more insulating medium is added.

4. When the ambient temperature and humidity change and the ambient electric field changes, the drift of the capacitive screen will be caused, resulting in inaccuracy. 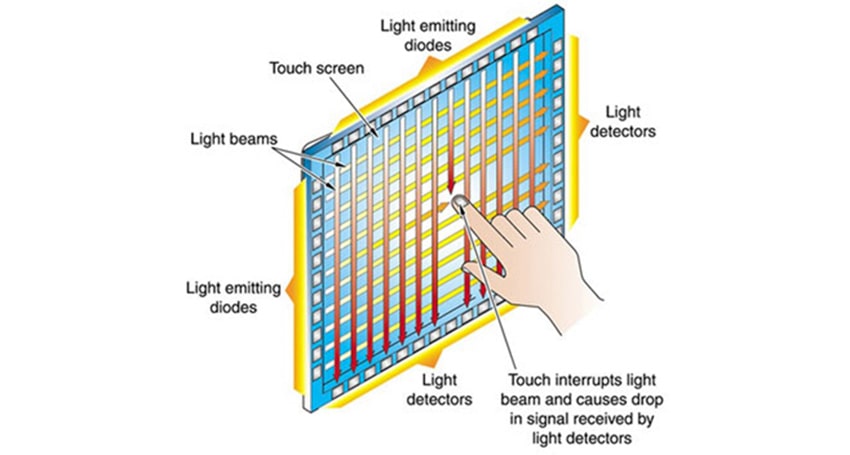 Infrared touch screen uses the dense infrared matrix in the X and Y directions to detect and locate the user’s touch. The infrared touch screen is installed with an outer frame of the circuit board in front of the display, and the circuit board is arranged with infrared emission tubes and infrared receiving tubes on the four sides of the screen, forming a cross-vertical infrared matrix one by one. When the user touches the screen, the finger will block the two infrared rays passing through this position, thus the position of the touch point on the screen can be judged. Any touch object can change the infrared ray on the contact to realize touch screen operation.

The infrared touch screen is not interfered by current, voltage and static electricity, and is suitable for some harsh environmental conditions. Its main advantages are low price, convenient installation, no need of cards or any other controllers, and can be used on computers of various grades. The disadvantage is that there is no capacitor charging and discharging process, and the response speed is faster than capacitive, but the resolution is lower.

1. Free from interference of current, voltage and static electricity, the screen can resist strong impact. 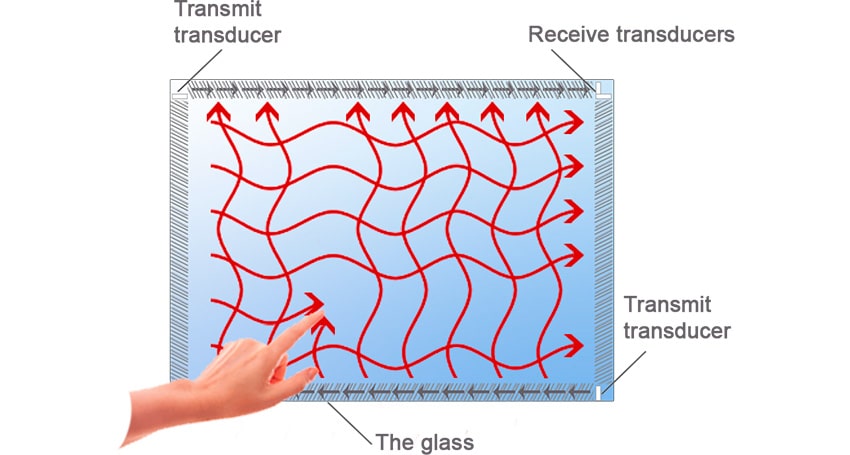 The touch screen part of the surface acoustic wave touch screen can be a flat, spherical or cylindrical glass plate, installed in front of the plasma display screen. This glass plate is just a piece of pure reinforced glass, which is different from other touch screen technologies without any film and covering layer. The upper left corner and lower right corner of the glass screen are respectively fixed with vertical and horizontal ultrasonic transmitting transducer, while the upper right corner is fixed with two corresponding ultrasonic receiving transducer. The four peripherals of the glass screen are engraved with very precise reflection stripes with 45 ° angle from sparse to dense. The Surface acoustic touch screen is suitable for use in POS machines, kiosks and other places in public places.

This technology was originally designed for smaller screens, so it is inconvenient to apply to screens larger than 30 inches. Because the technology cannot be encapsulated and is easily damaged by surface dirt and moisture, it is not suitable for many industrial and commercial applications. Dirty surface will cause dark spots on the screen, which requires regular cleaning of sensors and irregular adjustment. Based on the operation mode of technology itself, it is also difficult to avoid unnecessary interference, such as the interference of external sound.

2. Highly durable, good scratch resistance and sensitive response. It is not affected by environmental factors such as temperature and humidity.

3. High resolution, long service life; High light transmittance, can maintain clear and transparent image quality; No drift, only need to be corrected once during installation; There is a third axis (I .e. pressure axis) response.

Currently, it is widely used in public places. The Surface acoustic screen needs to be maintained frequently, because dust, oil stain and even liquid of beverage will block the guided wave groove on the surface of the touch screen, making the wave unable to be emitted normally, or make the waveform change and the controller cannot recognize normally, thus affecting the normal use of the touch screen. Users should pay strict attention to environmental sanitation. The surface of the screen must be wiped frequently to keep the screen clean and clean, and a complete and thorough wipe should be done regularly.

Some differences between OLED and LCD.

The LCD screen size corresponds to the actual size